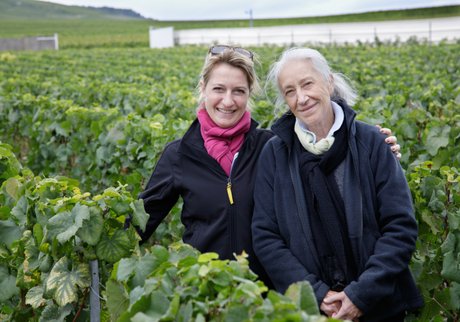 The estate lies in renowned Grand Cru Village Le Mesnil-sur-Oger in Côte de Blancs. The family owns around 15 hectares in this village and another 5 in the Côte de Sezanne as well as a few ares in Vertus.

Pierre, the son of the founder Alex Moncuit, started making his own champagne from the estate grapes in 1928, followed by daughter Nicole Moncuit, who runs the estate today together with her brother Yves and daughter Valérie Charpentier.

Nicole, being one of the first female winemakers in Champagne, took over from her father in 1977 and immediately won acclaim for her wines. The philosophy of the house is that terroir is best expressed with a single vintage; thus all the cuvées, even if not always shown on the label, are made from grapes grown in a single year. Having installed a modern cuverie in 2007 which enables separating all the parcels until bottling, the winery still has excellent and ample blending material. Grape selection is rigorous and the average age of the vines is an impressive 50 years. The Cuvée Nicole Moncuit is made from vines over 90 years old, coming from the famous parcel 'Les Chetillons'. All wines are fermented in steel tanks, with completion of the malolactic conversion.

Another philosophy of the house is the long ageing on the lees - the wines are released when they are deemed ready, which depending on the year and cuvée can be anything from three to twelve years.

Preserving the terrior and the nature is important to the family, and since 2018 they are in the process of being certified HVE (Haute Valeur Environnementale).